Free knowledge is the foundation of all Wikimedia projects: anyone is free to use, modify and redistribute the content for any purpose. But copyright and free licenses are very confusing for new users, especially when they want to contribute pictures and other media files. A new illustrated licensing tutorial will now guide new users through the basics of copyright and free licenses to make their first steps easier.

You may remember that the Wikimedia Foundation unveiled a prototype of upload wizard for Wikimedia Commons (the repository of freely reusable media files used in all of our projects) a few months ago. The prototype was developed as part of the Multimedia usability project, a grant-funded, one-year project aiming to increase multimedia participation on Wikimedia websites.

One of the main issues identified early on is that the current workflow of the upload process attempts to provide an advanced course in worldwide copyright when the user uploads a file. In reality, our research showed (unsurprisingly) that most users either gave up in front of the overwhelming instructions, or simply ignored them.

Our approach was to separate the "educational" part of the upload page from the actual upload form. Copyright has proven to be one of the most unappealing topics to new users, who simply want to share their knowledge and artwork. For that reason, we created an illustrated licensing tutorial in a comic-strip format.

This licensing tutorial was developed with experienced Wikimedians, who had both the expertise on copyright and licenses, and the experience of guiding new users. They collaboratively improved the wording and suggested many changes to the illustrator. 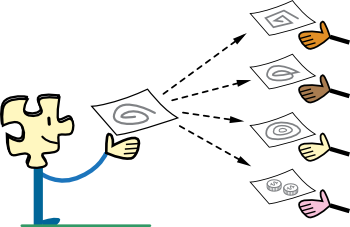 Puzzly is a character specially created for the licensing tutorial.

You will see that the tutorial features a new character, who was developed specifically for this project. We experimented with several others, but the puzzle-piece character was the one that worked the best.

Although developed primarily for Wikimedia Commons, both the tutorial and the character are under a free license; we hope experienced participants will reuse them for similar tutorials and across help pages.

The tutorial was created by Michael Bartalos, a freelance illustrator from San Francisco. Michael did an awesome job at illustrating complex topics without sacrificing readability or accuracy.

I would like to thank him for putting up with our hands-on approach; it surely wasn't easy to accommodate our requests and all the little details in wording, typography and graphics that Wikimedians are expert at.

The tutorial is now available on Wikimedia Commons as an editable vector graphics file (SVG) to facilitate localization. It will be included in the Upload wizard's interface when it is released at the end of November.

In the meantime, Wikimedia translators are warmly invited to help translate and localize the tutorial. If you don't feel comfortable creating the localized tutorials yourself, you can focus on the text. We'll seek help from the Graphic Lab on Commons to create the localized artwork.

Licensing tutorial en by the Wikimedia Foundation, under CC-BY-SA 3.0 Unported, from Wikimedia Commons.